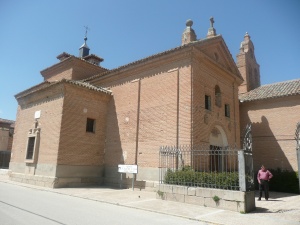 I have always enjoyed travelling in Spain and visiting the places of John of the Cross. The first time was when I was in university and went to Spain in the summers to teach English to some Spanish students. Since then I have returned with my wife, Helen and traveled first in the south, especially in Andalusia and later on a couple of occasions throughout Castile. I would like from time to time to share with you some of our travels so you too can keep in your mind the places in which John lived as you read and study his wonderful teachings.

Fontiveros is situated on the Castilian plateau, about thirty miles from Avila. At the time of John’s birth it had about 5,ooo inhabitants. It is still a small town now just off the main interstate from Avila to Salamanca. My wife and I visited the town and enjoyed connecting with the place of John’s birth.

John of the Cross was born in 1542 in Fontiveros, a town of about 5000, just northwest of Avila. His parents, Gonzalo de Yepes and Catalina Alvarez, scraped together a livelihood from weaving silk scarfs. Sadly, soon after his birth Juan’s father died and then his older brother, Luis, who had suffered from malnutrition. This left his mother, Catalina, with her other two sons, Juan and Francisco, without adequate income to support our young family.

His father, Gonzalo, came from a family of wealthy merchants, but they were unwilling to offer  any financial support because they thought Juan’s father, Gonzalo, married below his status when he chose my mother, Catalina, whom he loved, instead of some other woman who would bring additional wealth and status to the extended family. So, Catalina and her family were put out on the streets by those who could and should have helped us. Catalina faced disappointment from those around her; she gained no financial support from where she might have expected it. The only thing to do was uproot the family, leave the tombs of her loved ones in Fontiveros, and endure the hardships of travelling here and there in search of employment. Very soon in life John experienced the tragedies of unemployment and uprootedness; experiences common to so many today.

Statue of John in the Main Square of Fontiveros

Fontiveros is still a quiet place, but one can see the churches that Catalina must have known and then see the little church built over the birth home of John. The parish church where John was baptized also contains the tombs of his father, Gonzalo de Yepres and his brother, Luis. The people of Fontiveros were clearly proud of their saint and excitedly showed us around their little town.

I have always found it important to be in the places where John was so that I could see what may have influenced him. In his later life he is influenced by by the places in which he lives while at the same time influencing them himself. In the case of Fontiveros, John was only here as a baby, and was never really a part of the town. However, don’t tell the locals that! He is their saint and they are proud of him. When we asked directions from three young children they were thrilled to take us to John’s home and clearly were proud of their saint.

One thought on “In the footsteps of St. John of the Cross: Fontiveros”

A blog on John of the Cross

This is a blog for people like me who are enthused by the life, teaching, and challenges of the great Spanish mystic, John of the Cross. It should be helpful for experts, students, and practioners in spirituality, contemplation, mysticism, retreats and spiritual direction.

My Newest Books Available at Amazon

See my blog on Spiritual Leadership