For various reasons I have been unable to write my blog for several months. So, let’s make a new start and begin a year together focusing on reflections about John of the Cross. I look forward to continuing them in the months ahead focusing on  a special year with St. John of the Cross. In this year with St. John of the Cross we will read and reflect on his life, ministry, spiritual direction, spirituality, as well as selections from all his works, short and long. The readings and reflections will introduce us to all these, as well as comments from many leading writers and commentators on John. This year will be an opportunity to immerse ourselves in the spirituality of John of the Cross. 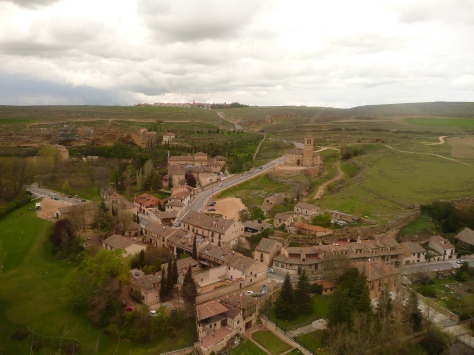 I took this photo from the walls of the Castle of Segovia looking down on the residential area below. The church in the center right is now of the Knights Templar. John’s church and monastery are center left. John was the superior here for several years. One of his spiritual directees was Dona Ana de Penalosa for whom John wrote both the poem and commentary on the Living Flame of Love, and she left her palace and took up residence in one of the houses in the picture. She and her husband are buried in the church.

Throughout the year we should keep in mind the importance of appreciating the entire spiritual system of John, which is reflected in all of his works. Likewise we should see the links between John’s various works, know something of the historical background and times of John, and be sensitive to his use of mystical language. When reading John’s works we must avoid entering them with prejudice from former false understandings of John. We should read his writings directly, often, and reflectively, and try to enter into dialogue with John. We should appreciate the unique focus and message of each of his works, remember the central significance of his poetry, and above all be sure to interpret his message for today.

The Church of the Segovia Monastery

This is the church of the monastery in Segovia where John of the Cross is buried. Next to it is the shrine of Fuencisla where the Madonna was honored even before John’s time and still is today.

1. This year is an opportunity for each of us to respond to John’s call and challenge like never before—to dedicate ourselves to life with God in Christ.
2. Perhaps in the past we may have dabbled a little with John’s life and works. This year can be an integrated approach.
3. If we are faithful to these daily readings and reflections they can transform our approach to spirituality.
4. Let us prepare our hearts for the reflections that lie ahead.

• Pray for openness to the challenges of this year.
• Ask God to prepare you for the unexpected.
• Think about sharing these reflections in a group. 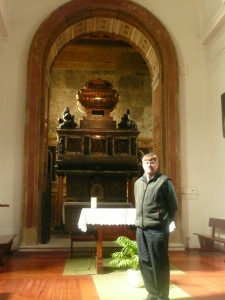 The tomb of John of the Cross in Segovia

The year I finished a manuscript for a book on John’s Dark Night, my wife and I decided to visit the places in Castile connected with the life of John of the Cross. On a previous occasion, after finishing my first book on John, The Contemporary Challenge of John of the Cross, we had visited many of the places frequented by John in the south of Spain, particularly in Andalusia. We were excited about our new trip; I had been to Castile on a previous occasion when I taught English one summer to a group of students in Logrono, and then took the opportunity to move south to Avila, Segovia, and some of the surrounding places. My wife and I decided to drive from Italy where we lived at the time, and we ended up driving about 3500 miles, over a period of eighteen days. We drove through varied and wonderful country in Spain—mountains, valleys, badlands, and Montana like areas, fertile farming areas, orchards. We had left Manresa and decided to stop at El Pilar in Zaragoza, a major marian shrine—what a wonderful place, as was the beautiful San Seo. We arrived in Segovia from Soria on April 22nd. We had stopped in Ciudad de Osma with its wonderful cathedral, public areas, and walking places. Then we moved on to Segovia with its magnificent buildings. 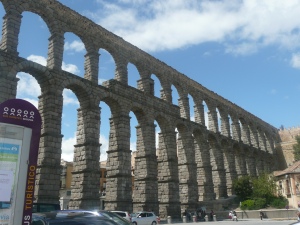 As we approached the city, the weather was beautiful and Segovia was at its best, exciting, wonderful, and truly magnificent. Our hotel was just outside the city, but we went in immediately, and like all visitors to Segovia were awestruck at its Roman aqueduct—a truly brilliant work of human creativity. Then we walked through the main streets, focusing on the places that existed in John’s time, trying to think how he felt surrounded by such beauty and wealth—the Cathedral, churches, plazas, and buildings of wealthy families and nobility.

The Cathedral of Segovia was destroyed in 1521 during the Comuneros War and the new one constructed under the inspiration of Charles V and dedicated to the Assumption of Mary and to St Frutos, the patron of Segovia. The work began in June 1525, seventeen years before John’s birth, and it was not completed until many years after his death. John would have seen the early progress of what became the last great Gothic Cathedral in Spain. From the Cathedral it is a short and easy walk to the great Alcazar of Segovia, dating back to the twelfth century.

This magnificent castle looks like something you would see in a children’s book, and in fact was one of several that Walt Disney visited as the basis for his castle in Disneyland. This was one of the favorite residences of the monarchs of Castile, and it was from this place that Isabella the Catholic left to be proclaimed Queen in the main square of Segovia in 1474. From the walls of this splendid palace and fortress we could look down on the river Eresma in the valley below and immediately see the Monastery of Discalced Carmelites where John had been prior. In the late afternoon we made our first visit to John’s former community and spent time in reflection at his tomb. It was a simple but wonderful space. We also saw the tomb of Dona Ana of Penalosa, one of John’s disciples and the person to whom he dedicated both the poem and commentary, the Living Flame of Love.

The next day we returned to Segovia, stopping first at the church of San Lorenzo, built in the twelfth to the thirteenth centuries and known to John. We then went on to the splendid fifteenth century monastery of Santa Maria del Parral and the community of Hieronymite monks. Not far from the monastery we entered the Church of the True Cross, originally constructed by the Templars in 1208, it is now under the patronage of the Knights of Malta. We passed the Carmelite Monastery and moved on to the sanctuary of Nuestra Senora de la Fuencisla, built in the sixteenth century on an original shrine of the thirteenth century, known to John, to honor the patron of the city and surrounding lands. We then returned to spend time at John’s tomb and reflect on some of the central reasons for our visit. After lunch in the old Jewish quarter we wandered around the city again visiting some of the churches that John must have known. Later that evening we returned to view John’s monastery from the city walls and then to go outside the monastery to look up at the illuminated Alcazar, truly picturesque and magnificent. You feel a different spirit in this city, reflective, artistic, and historical.

A blog on John of the Cross

This is a blog for people like me who are enthused by the life, teaching, and challenges of the great Spanish mystic, John of the Cross. It should be helpful for experts, students, and practioners in spirituality, contemplation, mysticism, retreats and spiritual direction.

My Newest Books Available at Amazon

See my blog on Spiritual Leadership